The Stonewall riots are one of the major milestones in queer history. The Stonewall Inn was a bar in the Greenwich Village area of New York, frequented largely by the poorest members of the LGBT+ people in the area. The police had a long history of conducting violent raids on the Inn and harassing the LGBT+ clientele. On 28th June 1969, the police once again entered the Stonewall Inn, with the intent of shutting it down permanently. They began to arrest people in the bar, but met resistance. Eventually around 500 people, some of whom had not been in the bar that night, crowded around, preventing arrests and eventually forcing the police to barricade themselves in the building. A riot squad was called in and protesters clashed with police for several hours before being dispersed.

A year later on the 28th June 1970, to commemorate these events, the first ever Pride marches were held. One was held outside the Stonewall Inn, with simultaneous marches held in Chicago and Los Angeles. The next year these marches spread even further, and spread internationally, with Berlin, London, Paris and Stockholm having their first ever Pride marches in 1971.

The Stonewall Riots was a watershed moment not only in encouraging the flourishing of the gay rights movement, but also changing the nature of the movement. One of the groups to come together after the riots was the Gay Liberation Front, a group that eschewed the previous generation of activists methods of assimilationism. The GLF announced their formation with a flyer reading “You think homosexuals are revolting? You bet your ass we are”. Whilst the GLF itself was to be short lived, they marked a new era in the fight for LGBT+ rights, taking a more confrontational note, with members also openly calling for the fall of capitalism, and working with the Black Panthers and the New Left organisations of the time.

Last year marked the 50th anniversary of the Stonewall Riots, and we now celebrate June as Pride month because of it, and in fact pride marches occur throughout various cities all through the summer. However, the nature of these marches has changed almost beyond recognition from those early days of defiance, where queers demanded their rights. Pride has unfortunately become a big budget production, with as many corporate logos as rainbow flags. Companies will use the rainbow flag to project a progressive sheen on their brands, whilst actively participating in the systemic oppression of LGBTQ people.

Companies are happy to jump onto progressive agendas if they feel to do so would bolster their profits. When the Mars corporation makes Skittles white for the month of June, that’s a calculated move to sell more, it’s not about their genuine commitment to ending homophobia. If these capitalist enterprises truly cared, how is it that queer people are still much more likely to be affected by unemployment and homelessness? We have seen the same thing in the last few weeks with the Black Lives Matter protests. Many companies have put out statements of support for the protests, yet the BLM movement has been going on since 2014, and the anti racist movement for much longer before that. The difference is that the huge, global protest movement has shown that there is a change in the political landscape, and so they see the possibility of losing out on profits by not taking a “stance”. The capitalist is nought but a weather vane, guided by nothing other than the winds of profit.

One counter to the profiteering from protest that is often offered up is to frequent and purchase from the businesses owned by members of the LGBT+ community, but this is in no way an actual solution. Most of these businesses are owned by a few very wealthy, conservative LGBT people who perpetuate the same systems of oppression as other capitalist businesses. Whilst they are clearly less likely to discriminate on the basis of homophobia, there still exists discrimination on other aspects of special oppression, such as on race. In addition, these businesses are also likely to pay low wages. It is hardly a boon to the queer community when employers continue to pay poverty wages. And often these same businesses continue the trends of gentrification, and price out working-class LGBT+ people. Capitalists will always look out for their own class interests first and foremost, including at the expense of their own oppressed minority groups.

Special oppression is inherent to capitalism. The capitalist class’ greatest fear is a unified working class, and as such they continually perpetuate systematic oppression in order to keep us divided. The working class as a whole has the power to transform society, due to our relationship to the means of production. Capitalists profit by exploiting our labour, but this also means that if we were to withdraw our labour, en masse, the system would collapse. This is why the capitalists have for hundreds of years stoked divisions. They tell us that the immiseration of the working class is down to immigrants, or because of feminism, or because of the LGBT+ community.

Class struggle as route to liberation

Whilst the class struggle is the route to liberation for all specially oppressed groups, steps forward can be taken under capitalism. Socialists must fight for reforms that benefit workers where possible. Over recent years the queer community has seen a number of legal reforms, such as the right to get married, protection from employment discrimination or the right for gay couples to adopt. However, clearly these reforms do not go far enough. Employment protections may have been introduced, but these are easily circumvented, as can be seen by high levels of unemployment among LGBTQ people.

Not only are legal reforms often lacking, they can also be attacked and revoked by the capitalist class. We can see this happening currently with attacks on trans rights. 2 years ago the government started a consultation about updating the Gender Recognition Act, which was initially introduced in 2005. The scope included extending gender recognition to non binary people, and removing complex legal hurdles to gender changes. Instead, the consultation was shelved for 2 years, and when it was finally brought back, Liz Truss the Minister for Women and Equalities attacked trans rights.

The discourse surrounding trans rights over this period has often resembled the same justifications used for Section 28, a law that criminalised teaching children about homosexuality. People advocating for trans rights are smeared as being child abusers or attempting to brainwash children, in a direct parallel to what occurred to lesbians and gay men during the Section 28 years. And importantly this is being used as a wedge issue. The groups supporting the attack on trans rights are often hard-right evangelical christian groups, such as the Heritage Foundation, and their end goal is to attack the rights of all LGBT+ people.

In addition to this, reporting of hate crimes has increased massively over the last decade. Just between 17/18 to 18/19 the reports of hate crime incidents of all varieties rose by 13%, but hate crimes on the basis of sexuality rose 25%, and hate crimes against transgender people rose 37%.

Legal reforms are likely to be attacked by the forces of conservatism, and even where they stay in place, they do not offer up concrete protections for oppressed minorities or significant improvements to their material conditions. The only real way to end homophobia, transphobia, sexism, racism etc. is through socialist revolution. With the move away from the capitalist mode of production, we can offer up a properly democratic, equal society. Pride these days may have become more of a parade, filled with corporate logos, but that’s no indication that the fight for LGBT+ rights is over, and that fight must be linked to the class struggle. 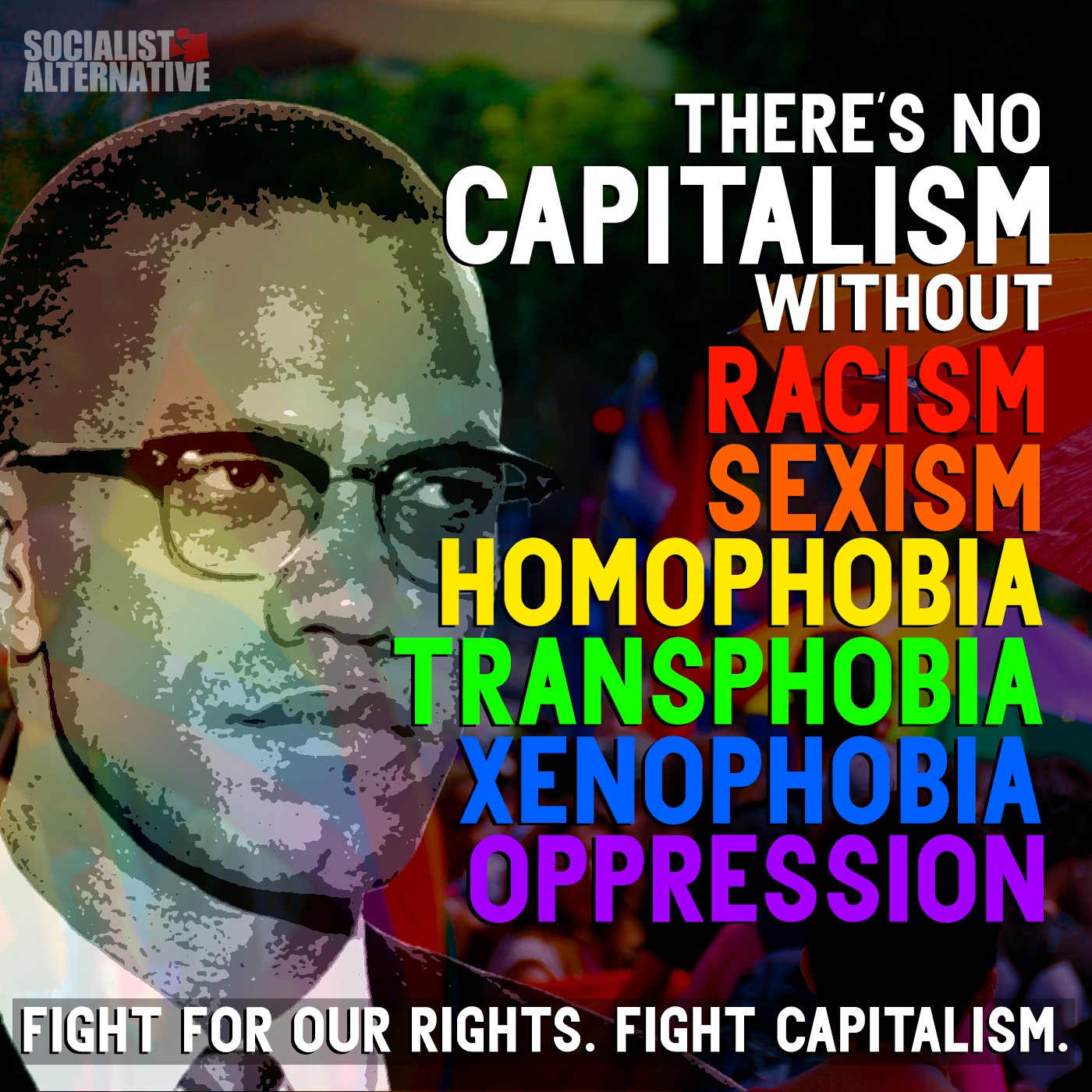 Corbyn suspension: Time for a New Left Party to Fight the Tories

Condemn Corbyn’s suspension Organise now for socialist change, and to build a political voice that can be a real opposition to the Tories Jeremy Corbyn is not anti-Semitic. He has a lifelong history of fighting racism in all its forms. It is a disgrace that he has been suspended for saying that the report into […]

The news that Corbyn has been suspended as a result of the Equality and Human Rights Commission is an utter disgrace and a testament to the right-wing counter-revolution which has rapidly taken place since Keir Starmer was elected leader. No doubt, the Blairites in the Labour Party will be celebrating – this is what they […]

Revolutionary Ideas: Building the fightback among workers and young people

Even before the pandemic, workers and young people in the UK were in a crisis. Housing prices in urban centers were skyrocketing, zero-hour contracts and precarity were haunting the future of young workers and even the most earnest trade union leaders had largely abandoned any idea of a large scale fightback based on the membership […]