The issues of democracy and transphobia within the National Education Union (NEU) have been dragged into the public eye again over the last few weeks. The Officers Group (OG) of the Union voted to nominate Debbie Hayton, a supporter of the transphobic feminist group A Woman’s Place, for a trans position on the TUC LGBT+ Council.

The OG is made up of six current and past presidents, including Kiri Tunks, a founding member of A Woman’s Place. Hayton’s views, encapsulated in her infamous ‘trans women are men – get over it!’ t-shirt, are at odds with NEU policy and the views of the vast majority of NEU members.

This move was met with fury from members in the NEU Trans and Non-binary Network after it was revealed not through a public statement, but through messages shared in the ‘Campaign for a Fighting Democratic Union’ WhatsApp group. We immediately launched

The OG then met again and issued a statement claiming they were not ‘fully informed’ on what and who they were voting for, and acknowledging that they had caused ‘upset and discomfort’ among members. It is clear that some of the officers did not know about Hayton’s views – but this cannot be said for Kiri Tunks, who voted for and pushed the nomination of Hayton. This decision was taken despite it being very clear that it does not reflect the views of our membership, particularly our trans and non-binary members.

An email from NEU President Amanda Martin was then sent to Executive members, claiming there had been ‘concerns raised’ about the ‘use of the official NEU logo’ on the petition – a thinly-veiled threat against the organisers. The Trans and Non-binary Network is a recognised group within the Union – despite this we were attacked for using the Union’s logo! Bureaucratic attacks on members over petty issues like this have no place in the labour movement.

Finally, after nine days of campaigning on this issue, Amanda Martin apologised for the decision. It also seems that the threats of action over the use of the NEU logo have been withdrawn. Clearly this does not fix the problem, and members are still pushing for the nomination to be withdrawn – including writing to TUC General Secretary Frances O’Grady asking for the TUC not to accept the vote – however it is a significant step forward that the Union’s officers have admitted the problem.

The disgusting nature of Hayton’s views was the catalyst for this outcry, but it would be wrong for the OG to be taking these decisions whoever they voted for. None of the members of the OG can be held accountable by the members, particularly LGBT+ members. The decision could have been taken by the intended delegates to the NEU LGBT+ conference, by the LGBT+ National Organising Forum, or by the Union’s Executive. The Covid-19 pandemic has prevented in-person meetings – it has not prevented democracy altogether! Our Executive and district meetings must be allowed to vote and take decisions, rather than small sections of the leadership making those decisions.

The Tory plans to scrap the Gender Recognition Act reforms and threats to introduce a ‘bathroom bill’ are an attack on trans rights, and the labour movement must meet that attack head on with public statements of support for trans people, lobbying of MPs and ultimately with industrial action. This struggle within the NEU shows that we can win: we need a fighting union that will fight the Tories and the transphobes. 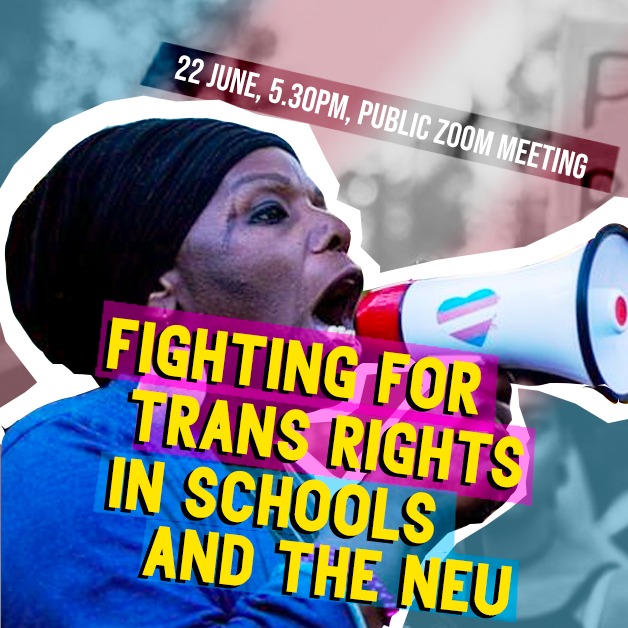 A Level results 2020: no to the unfair grading system

This Thursday 13th of August will see the release of A-level grades across England and Wales. This year, however, students are filled with more than the usual pre-grade jitters. The Covid-19 outbreak has led to the cancellation of exams for students all over the country. This has forced the government to devise an algorithm to […]

Outsourcing care: A disaster for staff and patients

In 2011, Southend Care (renamed to Essex County Care in 2015), set up a new company, Leicestershire County Care Ltd (LCC Ltd), which took over nine care homes from Leicester City Centre. This move was sold as a measure that would save the council £1million per year. As one leading council member put it: “I […]

An official review of pelvic mesh and medicines in pregnancy reveals systemic sexism and abuse of power within the health care establishment over decades. The Cumberlege Review ‘First Do No Harm’ was published in July after a two-year investigation into countless examples of avoidable harm done to women who were treated for Pelvic Organ Prolapse […]